What is a dimensional mailer?

A dimensional mailing is by definition, a package that has some sort of length, depth and width. It isn’t just a flat postcard or standard letter. It has some heft to it! And that’s exactly what makes it stand out in your recipient’s mailbox.

Because dimensional mail looks so unique, it has a better chance of being opened-making it a great way to get into the hands of those hard to reach prospects. It has a higher response rate than regular mail-but that comes at a price. It is more costly to both produce and mail, so it isn’t for every campaign. But when it is used, feel free to think outside the box. With dimensional mail, you get to be as creative as you want!

Sure, you can mail out a pen. We’ve certainly done it, but you can do better than that! We once sent a group of Silicon Valley’s most sought after prospects a video player that started playing as soon as it opened. It’s hard not to hear that message. And then there’s the time someone sent a single shoe to a fashion loving prospect. The prospect was promised a second shoe if he agreed to a meeting. How genius is that?!

The only limit to what you can mail is your imagination…and your budget! Nothing is impossible after all, only expensive. 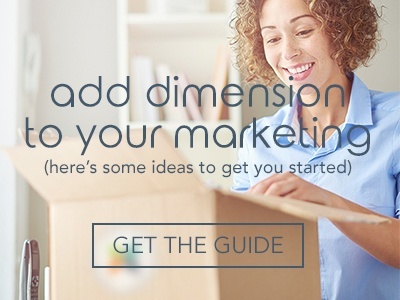